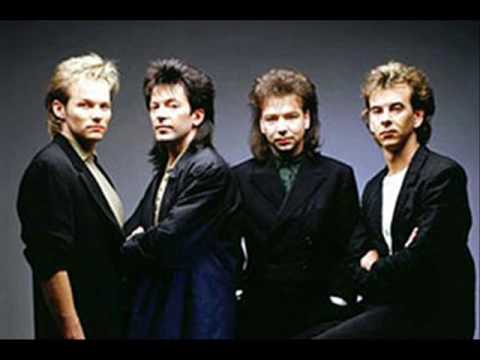 I keep looking for something I can't getBroken hearts lie all around meAnd I don't see an easy wayTo get out of thisHer diary sits by the bedside tableThe curtains are closed, the cat's in her cradleWho would've thoughtThat a boy like me could come to this?

I love when an unknown band's very first song goes to number one. It gives me a bit of hope that I can also succeed at things even when it seems very unlikely. That was exactly the case with the Cutting Crew's "I Just Died In Your Arms".They were previously unknown in the states but by May of 1987 the group's first single was sitting at the top of Billboard's Hot 100.

I've heard this song referred to as a power ballad and that doesn't seem to fit for me. When I think of a power ballad I'm envisioning Def Leppard or Whitesnake or some other band with big hair and lots of leather.  I don't know that I'd even consider "I Just Died In Your Arms" a ballad. What it is for me is a really great song that takes me back to high school. The synth kicks in and suddenly I'm in the backseat of my friend's boyfriend's Camaro, driving around the neighborhood.

That's a great memory. Check out the official video below!