Do you guys remember Sassy magazine? It was the alternative to typical teen magazines, created by the incredibly talented Jane Pratt way back in 1987. Instead of looking for the perfect outfit to wear on a date with the perfect all-American-boy, Sassy readers were more invested in actual social issues and dealing with real life rather than the fairy tale that the other pubs served up each month.

Sassy was the first thing that I looked at that made me want to write, just like that. It seemed like a dream career to be able to use my voice to make people think by challenging the ideas that the had already formed on their own. Back then I had no idea that being a writer would also be a somewhat devastating career path because it is filled with self doubt, rewrites, brutal editors and did I mention self doubt? And that's on the good days!

Researching a project that I'm working on has meant actually getting my hands on some of the things that shaped me as a teen and this week, that included old copies of Sassy. 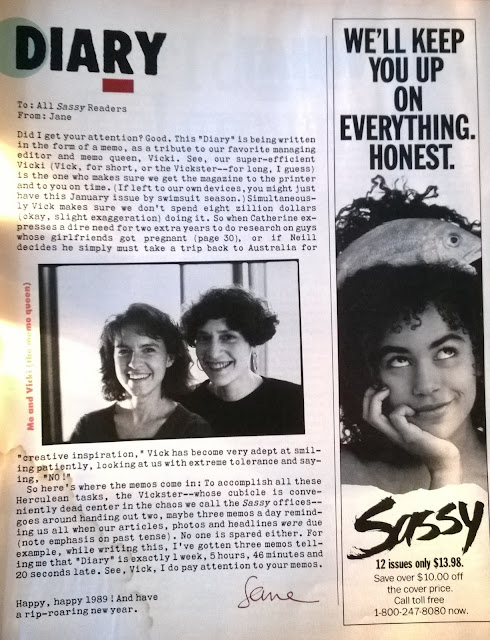 I actually remembered one of the issues, dated 1989. I remember buying it and carrying it with me for an entire month until Pratt rolled out the next issue. Once I picked it up I think the instincts just kicked in because I automatically flipped it over to read what was written on the binding, because there was always a message.  This time I looked at Sassy from a different perspective. 25 years later I know that I've made it. I know that whatever inspiration was in those pages, it stuck It has pushed me through years of wondering on-and-off why I chose this business in the first place.

I couldn't put my finger on any one thing now that obviously sucked me in all of those years ago. Instead I just ended up making peace with the idea that back then, Sassy was supposed to be that catalyst that gave me a clue about what my career might be. 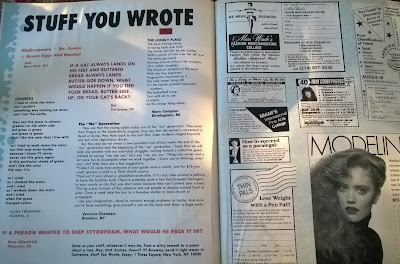 When I'm stuck up against a deadline for a job I don't level, it's likely Sassy's influence that helps me to keep pushing through. When I tackle serious topics and the feedback is wonderful, well I owe all of that to Sassy as well. It was Pratt that first taught me how to talk about uncomfortable things and to trust that I'd survive on the other side of them.

I have teen daughters now and ironically enough, I found myself handing over the 26-year-old issues of Sassy to them yesterday. Not only does the advice still stand, but the conversational style still beats anything at all currently on the market for this generation.
Posted by DailyBOOM at 11:30 PM