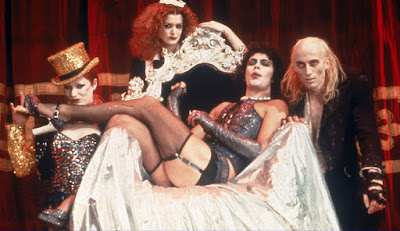 "Let's do the time warp again."


For the record, I'm not so old that I remember the cult classic hit when it first rolled into a limited number of theaters. No. But it does take me back to my freshman year of high school.

Up until then my knowledge of Rocky Horror was limited to the fact that our local shopping mall movie theater showed it every Saturday night and honestly, I only knew that because it was listed on the big sign out front. It was the very last thing listed and it seemed like "The Rocky Horror Picture Show" always seemed to be missing a letter.

In ninth grade my homeroom was in one of the main freshmen art rooms and it was like nothing I had ever seen before. While I've mentioned my dad's love/obsession with music and how that influenced me, my mom's creativity also rubbed off. She was always an artist of some sort. I actually remember her being in art school when I was in preschool and going to the library with her every week. She would check out books on commercial art while I got... whatever and then we would go for lunch at a little drugstore luncheonette nearby. I still remember looking at copies of our daily newspaper to find my mom's drawings. Way back in the 70's and early 80's any store advertisements were drawn and she used to do the ads for women's wear. She also had a perfume ad that was used for a major campaign and I remember her working on a greeting card line that featured a little girl with a magical purse. 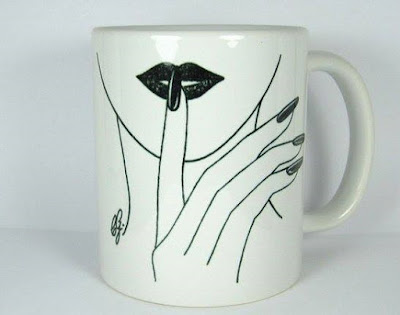 So anyway, back to me. I was raised surrounded by art supplies and creativity so walking into this classroom was surreal. Real talk, it was probably pretty shitty if you weren't into art. It was the size of about three classrooms put together and we sat at huge wooden tables that seated 8 people. The tables were coated in paint, pastel and every other medium available. There was artwork from floor to ceiling, no lie. Mr. Kingsley put things up really high to dry and while it looked like a disaster I don't think he ever actually lost anything. I ended up having him for art, which I chose as an elective so that meant I spent 90 minutes in his class twice a week.

It was in his class that I got to know a girl named Kim. I had known her for a few years but never spent any real time with her until 9th grade. She and I were the only girls at our table and as luck would have it, all eight of us really were into art, so it was cool right from the start. It was early 1986 and after a few months together we had all really bonded. Mr. Kingsley, well he was a trip. Super quiet and always wore a layer of guyliner. He smoked in his closet and let the guys chew (remember when THAT was popular???) as long as they hid their spitters if the principal walked in. As long as we did our work he left us alone and encouraged us to talk from bell to bell.

Talk we did. Kim's obsession was The Rocky Horror Picture Show. She talked about it nonstop and was super excited because her mother was allowing her to go to the midnight showings at the mall each week. Since she was able to go Kim decided to dress up as her favorite character, Columbia. Back in the 80's not only did people go to the movie every week but they also dressed up and reenacted it in front of the screen and Kim was picked to be our theater's unofficial official Columbia.

She would take pictures every weekend and bring them into art class on Monday to show us. I have to wonder if she still has a stack of those photos and if so does she crack them out to show her kids now? Anyway, after months of hearing about Columbia and Magenta and Riff Raff a few of us decided to go to the show with Kim. That was a one-time thing because none of us really saw what it was that kept Kim running back for more, but Rocky Horror gave this girl life all the way through high school.

I shared a lot with my table mates in that art class. On the good days we won the coin toss and controlled the radio, dissected Heather Locklear's marriage to Tommy Lee and counted down until we weren't freshmen anymore. On the bad days we cried over a classmates death in a car accident, fought over art supplies and vented about real life problems at home. On one particularly bad day in January of 1986 we, like the rest of the school, had our classroom television tuned to the live launch of the Challenger Space Shuttle. It was the first time that a teacher was chosen to go into space, making it a groundbreaking mission. When the Challenger broke apart a little over a minute into its launch our whole class screeched, a sound that seemed to echo through the entire school.

That old art classroom may have been the messiest in the school, but looking back it kind of feels like one of the most valuable spaces in the building. Those walls, to this day, hold an awful lot of  personal history for thousands of kids that have passed through over the years. Make ups and break ups, secret revelations, historical moments in American history, oh and of course, tons of creativity and the birth of a few very successful artists as well. I used to think that Mr. Kingsley was just flying by his ass and doing the bare minimum to keep his job. Now I get what he probably did decades ago. The very best thing that he could do was to create a space for kids to come and just "be" for awhile. Rocky Horror Picture Show and all.

I still can't believe it's 40 years old. I'm thinking it's time to take another look at the flick to see if my impression has changed. God only knows what seeing the real Columbia in action will remind me of!