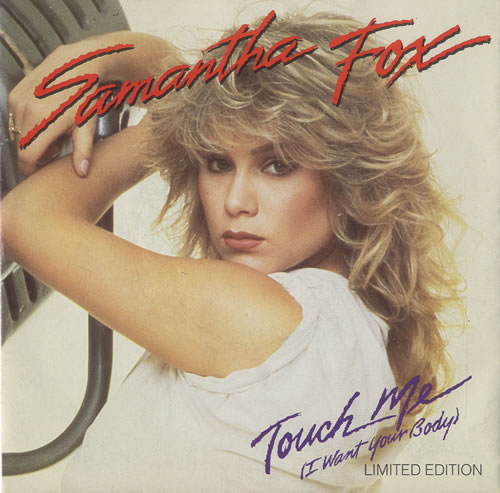 "Quick as a flash
You disappeared into the night
Did I hurt you, boy?
Didn't I treat you right?
You made me feel so good

Way back in 1986 Samantha Fox REALLY shook the music industry. It was a point in time when women were thought to be best at ballads or bubblegum pop tunes. Taking any stage and blatantly singing about sex was not just unheard of but it was also pretty unacceptable. The double standards were still in effect and so if a male rocker mentioned sex it was cool but women still knew better than to go there. At least until a catchy little tune called "Touch Me (I Want Your Body)" landed in DJ's hands.

I'm sure the fact that Sam was hot and a topless model didn't hurt because she looked like a poster child for sex. And this song worked. It went to number 1 all over the world and much of the music-buying public really latched on to this song. She was playful, provocative and in control- something that appealed to men and women alike.

"Touch Me" was also a great club banger so if it wasn't on your radio or MTV you could count on hearing it at the club. It literally was everywhere. Sam enjoyed a few years of success in the U.S. and she had a string of Billboard hits thanks to the impact of "Touch Me".  Check out the video below!