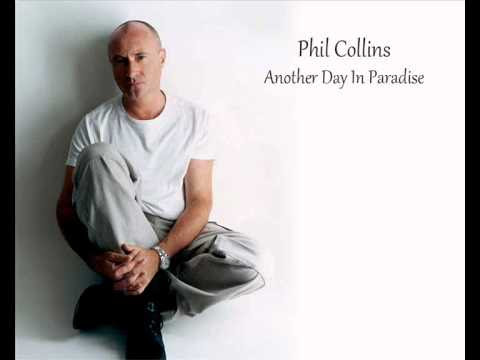 "She calls out to the man on the street"Sir, can you help me?It's cold and I've nowhere to sleep,Is there somewhere you can tell me? He walks on, doesn't look backHe pretends he can't hear herStarts to whistle as he crosses the streetSeems embarrassed to be there."

"Another Day in Paradise" was Phil Collins 7th number one song in his solo career and it also became a bit of a lightening rod  for controversy. The song addresses homelessness and the plight of those on the streets. It brought awareness to the problem, which still exists in every U.S. city and the songs aim was to remind people that their own personal situations could always be worse.

Collins came under fire because critics thought he capitalized on the topic without doing anything to actually help those living on the streets. He has said that it was written because having money and fame doesn't mean that you're out of touch with the reality of the quality of those around you.

It's one of those things that I think you can go in circles about. Awareness without action doesn't create change. But that awareness may have encouraged many people to take action , which meand Collins hope for the song (and message) was accomplished.
Check out the video for "Another Day in Paradise" below. How does it leave you feeling?