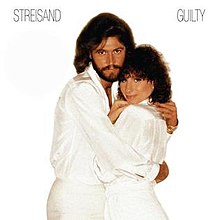 "Shadows falling, baby, we stand alone
Out on the street anybody you meet got a heartache of their own
(It oughta be illegal)
Make it a crime to be lonely or sad
(It oughta be illegal)
You got a reason for livin'
You battle on with the love you're livin' on
You gotta be mine
We take it away
It's gotta be night and day
Just a matter of time
And we got nothing to be guilty of
Our love will climb any mountain near or far, we are
And we never let it end."

How do you write about old school pop culture for years and not write about Barbra Streisand? Exactly. At the very start of the 80's, she was leading the pack of female artists. She already had more than 20 albums under her belt and had enlisted Barry Gibb of the Bee Gees to write and produce an album for her. He delivered on a grand scale because Guilty remains Streisand's best selling album of all time.

The album's first single, "Woman In Love" skyrocketed its' way up Billboard's charts and remains one of the diva's most beloved songs nearly forty years later. The title track, a duet with Gibb also became a fan favorite. Watching Streisand actually perform some of these classics is almost bizarre. She vacillates in and out of connecting with the song and just seems really quirky onstage. Maybe that's why her fans love her so much. I'm not sure but what I do know is that I still do love "Guilty". Check out a live version below and tell me if you see the quirkiness that I mentioned.