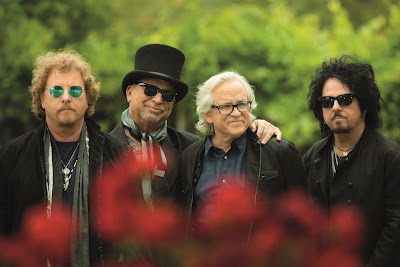 I can't remember a moment in my life when music wasn't somehow playing in the backdrop binding together those things that would become real memories while helping the less important things to just sort of drift away into oblivion. When I was a kid, if my dad wasn't at the studio, then he was most definitely locked away in his home studio. He first sucked me in the door to that room with disco and a lot of my homework was eventually done on the floor next to one of his huge speakers. The deal was that once my homework was finished then I could pick any song and listen to it in his chair, with his headphones on. That was a huge thing to me and dad was smart because as my musical taste expanded, so did my time in his favorite chair. What started as one song while looking at cover art turned into dad leaving me with entire albums and loads of liner notes to dissect.

In the late '70s rock was just rock and there was no need to categorize it or throw it into some sort of sub-category. Good music was just that, good music. Toto's eponymous debut, followed by Hydra a year later, were two of my favorites and I spent a lot of time with headphones on soaking up every note played. I didn't know exactly what "shredding" was, but I believed my dad when he said that Steve Lukather was already one of the best and I also believed him when he said that David Paich was writing songs that were going to "stick".

Flash ahead 43 years and my dad was right because Lukather is now the guy that other equally legendary musicians consider as a personal mentor and Paich, well that silly little song about "Africa" has made him a mountain of cash (plus I dare you to find anyone over the age of twenty that doesn't know the chorus). Four decades have brought the band an abundance of riches, like a handful of Grammy's, more than 40 million records sold, plus an induction into the Musicians Hall of Fame and Museum in 2009.

Those same years have contained painful losses, debilitating illnesses, litigation, and the kind of personal demons that touch each and every one of us eventually, in one way or another. Sometimes the family that you choose becomes almost more important than the one that you were born into and the brotherhood of Lukather, Paich, Steve Porcaro, and Joseph Williams might be even more precious today than it ever was before.

Toto decided to commemorate their 40th anniversary by embarking on a 40 Trips Around The Sun tour, a celebration that has actually lasted for nearly two-and-a-half-years. The band brought down the house last night (Oct. 20, 2019) at The Met in Philadelphia as they closed the door not only on this tour but also on this incarnation of Toto. The band is now on hiatus for a well-deserved break and any future plans will be decided much further down the road.

The near-capacity crowd at The Met seemed well aware of the fact that it was the beginning of the end for this era of Toto and there were some bittersweet moments that spilled off the stage into the audience, but for the most part, this show was a celebration. The band took the audience on a two-hour ride through their catalog of 14 studio albums, serving up some of the anticipated favorites and just enough deep cuts to make true fans grateful to be in the house.

Opening with "Devil's Tower" and "Hold the Line" delivered a one-two musical punch, the kind that lets you know that it's going to be a fantastic show. The first electric set seemed to fly by as it included an extra sentimental variation of "I Will Remember" and "English Eyes". The instrumental "Jake to the Bone" is a personal favorite of mine because it really shows off the musicianship that is the backbone of everything that Toto does. Lukather is just fantastic and keyboardist Steve Porcaro seems to have a bit of a mad musical scientist thing going on as well.

The quintessential favorite, "Rosanna" closed out the first set and anyone that had still been in their seat abandoned it. As the audience recovered from the adrenaline blast of that song, chairs were placed on stage and Lukather, Porcaro, Williams, Warren Ham (multi-instrumentalist/vocalist), and bassist Shem von Schroeck all settled in for an acoustic set. "Georgy Porgy", the first song that Lukather ever sang on for Toto, kicked off a sentimental musical journey that included "I'll Be Over You" and "No Love". I love stripped-down sets and this one really showed off just how much value each member has on their own. It's no wonder that the fully plugged in band sounds like layers of perfection.

Let's talk for a minute about 27-year-old keyboardist Dominique "Xavier" Taplin. He stepped in last year for an ailing David Paich and learned the entire show in just a couple of days. Lukather mentioned the band all wanting to adopt him and after a lengthy chat with him last year, I kind of felt the same way. He is talented enough to have toured years ago with Prince (let that sink in),  and his piano solo in this show was absolutely beautiful.

One of the best parts of seeing Toto play live is the way that they really capture that whole jam band kind of energy. Nearly every note may be carefully placed but it never really feels that way. Instead, it feels like a group of guys that really listen to each other and play off of each other in response and nowhere was that vibe more apparent than in the final set.

The often lost in their catalog "Girl Goodbye" sent the band soaring with some of Lukather's best playing of the night matching Williams' effortless vocals. The latter was a ball of energy throughout the entire show, laying down some of the best vocals that I've ever heard him do live. "Dune (Desert Theme)" is another of those layered instrumental pieces that is best appreciated live and "While My Guitar Gently Weeps", a sentimental favorite of Lukather, was one of the best songs of the evening. If you think that an electric guitar solo can't take you on an emotional roller coaster ride then you need to spend a few minutes with this version of the George Harrison classic.

On an evening filled with "moments," Toto was going to have to go a long way to top themselves, yet they did just that with their 12-minute version of "Africa".  David Paich (sidelined for health reasons since last year) was not only in the house, but he took his seat at the keys and sang those lyrics that he wrote so many years ago. The audience knew just how important this moment was and responded with both respect and gratitude.

Lukather shredded, Williams played with the crowd and percussionist Lenny Castro's solo smack in the middle of the classic song was nothing short of genius. As someone pointed out to me, you could hear the sleigh bells that are actually in the song, usually lost beneath everything else. An encore of "Home of the Brave" closed out the night with the entire band leaving absolutely everything that they had left to give on the stage of The Met.

Their break is more than deserved. 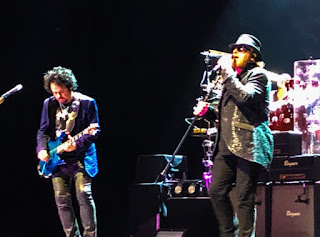 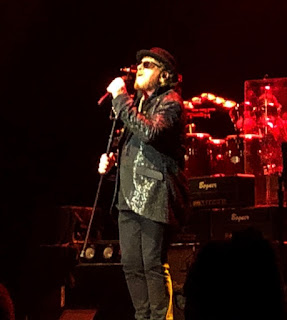 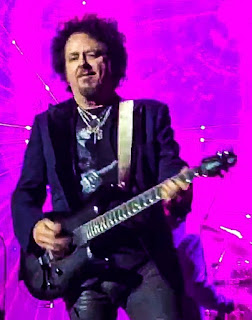 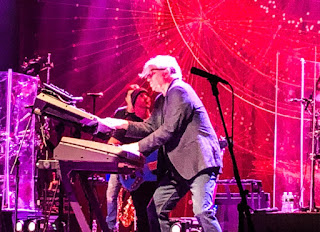 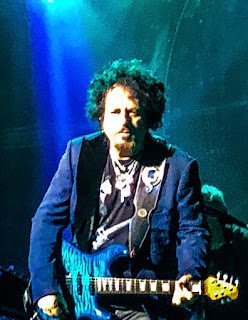 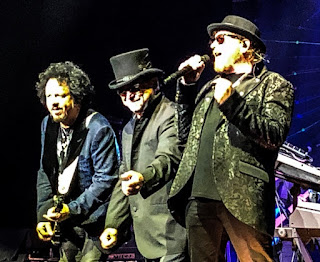 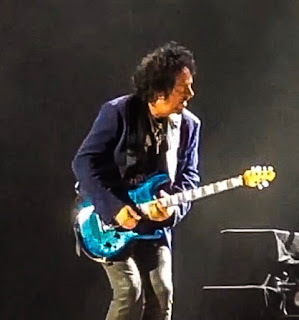 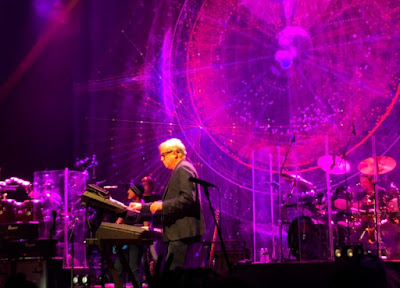 Acoustic:
Georgy Porgy
Human Nature
I'll Be Over You
No Love
Stop Loving You
Piano Solo

Encore:
Home of the Brave

Posted by DailyBOOM at 7:52 AM