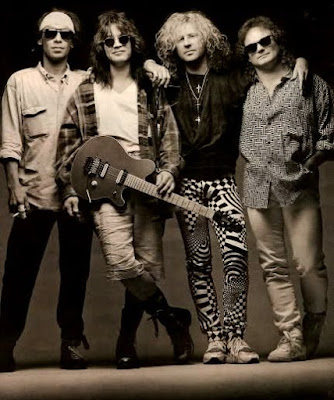 Run, run, run away
Like a train runnin off the track
Got the truth gets left behind
Falls between the cracks
Standing on broken dreams
Never losin' sight, ah
Spread your wings
We'll get higher and higher


Thirty years ago this past summer Van Halen's "Dreams" was holding pretty steady on Billboard's Hot 100. It was the second single off of the band's 5150 album and it was performed during the Sammy Hagar era of the band. Nearly 20 years after the release of 5150 Hagar finally admitted that "Dreams" is one of his very favorite songs from his days in Van Halen. That might explain why he is prone to perform it in his solo gigs.

There were actually three different videos made for this song but the MTV generation heavily favored the one that featured the Blue Angels so that became this songs visual calling card. Do you agree with Sammy? Is "Dreams" really one of the best songs that Van Halen has in their catalog? It has actually always been one of my very favorites. I can remember listening to the album when it was first released and thinking that this song was IT. How about you?

Posted by DailyBOOM at 1:08 PM