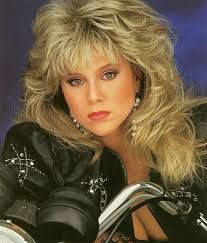 Why start 2017 off slowly when we can jump right in?  Samantha Fox isn't exactly known for ballads but she is one hell of a dance artist. She has also taken part in some of those freestyle shows that criss-cross the globe so in my mind, that makes Fox fair game. Close enough, right? Plus, I've always loved her. Fox was the very first woman that I can remember bluntly singing about sex in songs that actually charted well.

"Touch Me" was her breakthrough hit in the U.S. and I think the shock value alone easily made copies fly off of the record store shelves. By the time Fox returned with a follow-up album in 1988 we all knew what she was about. "I Wanna Have Some Fun" became a hit in my senior year of high school and it was one of those club hits that my friends and I listened to in between Bon Jovi and Def Leppard. It was simply a fun track that just so happened to have a double entendre which worked perfectly for Fox's sexed up image. Check out the video below. Were you a Samantha Fox fan?