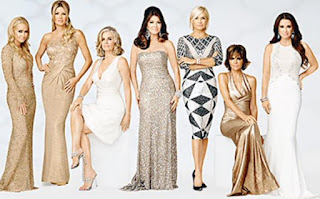 Was Kim Richards fired by The Real Housewives of Beverly Hills? Did she quit? Well, it seems to depend on who is doing the talking but one thing is for certain and that's that she certainly will not be returning to the hit Bravo series for season six. The bottom line seems to be that no one at the network wanted to deal with Richards lies about her sobriety any more and so she was not asked back. Of course, she has tried to put a different spin on it, proving that Richards still has an issue with accountability.

Back in April, just hours after the RHOBH's reunion show aired (which featured the reality star viciously defending her sobriety and slamming her cast mates for claiming that she wasn't okay) Richards was arrested in Beverly Hills for disorderly conduct, public drunkenness and in the chaos she even was accused of kicking an arresting officer. Richards went to rehab, left to attend her daughters wedding, went missing and then returned to rehab. She is rumored to be staying with her sister, Kathy Hilton, after recently being released.

While Richards struggle with alcohol and pills has been pretty obvious to anyone who has tuned in for an episode of RHOBH, just as troubling is her inability to take responsibility for her own behavior. Unfortunately, her shifting blame once again this week onto Bravo rather than blaming her firing on her own bad behavior certainly makes it seem like she still hasn't surrendered to the idea of accountability.

Do you think that the reality star has really hit her own version of “the bottom” just yet? Will she manage to finally stay sober and finally be able to take the steps necessary in order to put her life together for real? Will you miss her on RHOBH or are you glad to see her go?

Posted by DailyBOOM at 9:35 AM