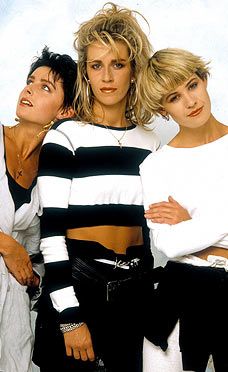 Bananarama is easily one of the most popular girl groups of the 80's. Songs like "Cruel Summer", "Venus" and "I Heard A Rumor" kept them near the top of Billboard's Hot 100 charts for a few years in the mid-80's. Their True Confessions album from 1986 is probably one of my all-time favorite pop efforts from that era, with "A Trick of the Night" arguably being one of Bananarama's best songs ever. The album version is basically a ballad but when it was released in December of 1986 as a single extra synthesizers and vocals were added in to give it a dance feel.

"A Trick of the Night" was also included on the Jumpin' Jack Flash movie soundtrack. While the song kind of stalled out on the charts it is still considered by many to be one of the ladies best songs, especially in retrospect. Do you guys remember this one?